NELSON BOYD is pleased to announce it is partnering with the San Francisco law firm ANDRUS ANDERSON to investigate equal pay violations.

Washington law requires that employees receive equal pay for equal work. Despite this, women are often paid less than their male counterparts even though they have the same job duties, education, training, and experience. Women are paid less than men in every single industry in the United States.

ANDRUS ANDERSON has been at the forefront of fighting for equal pay for women. They recently settled a lawsuit against Farmers Insurance for paying women lawyers less than their male counterparts, in violation of the law.

NELSON BOYD has a long history of fighting for the rights of the injured, people with disabilities, and employees and has taken on some of the country’s largest employers and corporations.

NELSON BOYD and ANDRUS ANDERSON are committed to enforcing your right to equal pay.

If you, or someone you know, believe you are not being paid what your male counterparts are, give us a call.

There is no charge to contact us and your call will be kept confidential. 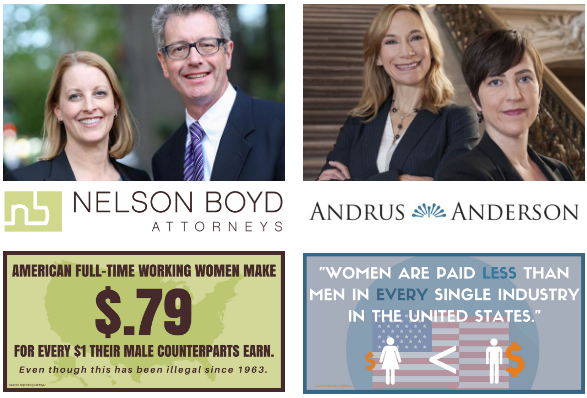