People look forward all year to their vacations with eager anticipation of adventure and relaxation. Living in Hawai’i, we see millions of tourists visiting the Islands each year and enjoying the ocean and mountain activities that make the state famous. But being away from home also creates some problems because tourists are in an unfamiliar environment and often unaware of the dangers and risks that are second nature to local residents. Here are a few tips to keep in mind when you travel.

Beaches in lakes, rivers and oceans oftentimes have small waves that roll up on the beach pushed by the ocean swell. These waves don’t so much “break” on the beach, but simply wash up on the beach. In Hawai’i and other places in the world, many beaches have what is known as ‘shore break’ which is a condition where the wave actually breaks or crashes onto the sand at the water’s edge. The National Oceanic and Atmospheric Administration (NOAA) warns:

A shorebreak is an ocean condition when waves break directly on the shore. Shorebreaks are unpredictable and dangerous. They have caused many serious neck and spinal injuries to both experienced and inexperienced bodysurfers and swimmers. Both small and high surf can be equally as dangerous and can cause serious injury or death. Be sure to ask a lifeguard about the wave conditions at the beach.

Hawai’i has many dangerous shore breaks and perhaps the most famous is that of a beach on Oahu about a 30 minute drive from Waikiki called Sandy Beach. The wave breaks directly onto the sand and if you watch the video below you will see that a person who is trying to body surf the wave could easily be driven down directly on their head and suffer a very serious spinal cord injury or brain injury. 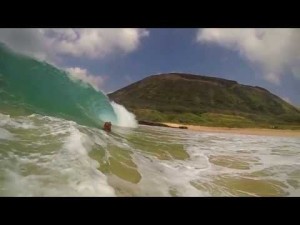 A good resource for tourists going to an ocean environment is the NOAA website article “7 Dangers at the Beach.”

Injuries are common at beaches in Hawai’i and many of the beachfront hotels have shore breaks much smaller than Sandy Beach, but that cause many paralyzing injuries to tourists and untrained locals.

Unless you are a very experienced body surfer, you simply should not attempt to body surf any of the waves that break on the beach in Hawai’i or anywhere else. And if you are in the ocean and attempt to ride such a wave, keep your head up in your arms and hands over your head to protect your head and neck should you be driven down into the sand. There are many quadriplegics whose visit at the beach in Hawai’i ended up in tragedy.

The ocean looks azure and peaceful in the sailboat that appears to be moving slowly in the calm waters. In some areas of the world the water is actually calm and flat and the sailboat encounters nothing rough. In Hawai’i and many other places, the water is calm within about a mile of the beach but then it becomes rough when you go out far enough to get into the main ocean swell beyond the wind line. Sometimes, the operators of tourist sails on large catamarans think of the activity as a thrill ride and take the boats into rough water where the whole of the boat will crash up and over the swell and then down into the trough where it encounters another wave. The ocean around islands such as Hawai’i often is extremely rough and the passengers are tossed about quite violently. Take heed of any warnings about finding a secure place to sit and do not move around the boat while it is moving in rough water. It is not uncommon for passengers to be thrown into the air coming down on their arms or hips and suffering fractures. Remember to find a place with secure hand and foot holds and realize that the boat may turn into a bucking bronco. If the wind is high or you see a lot of surf near shore, consider going on another day.

An Internet search of cool things to do in a tourist area almost always identifies places to go and things to do that are “off the beaten path” and advertised as being a favorite of the “locals.” As an example of such places, there are mountain pools and waterfalls in Hawai’i that oftentimes are on private land but which have become popular for people to go and swim in the cool water and jump off the waterfall into the pools. Many people are seriously injured or die at these locations because they assume they are safe when in fact they are not. One such waterfall has had many serious injuries and some deaths from people attempting to jump off a rock overhang into the pool, slipping and hitting the rocks below. Flash floods from the mountain streams that link these pools can occur on a calm sunny day and wipe out everyone on the rocks and in the pool. When this happens, the blame goes to the person who decided to go to these places and do what everyone else was doing. You have to wonder whether the fun is worth the risk of being paralyzed for the rest of your life or dying. So research carefully any place that you go that is off the beaten path to make sure you understand the risks involved in what may have happened to other people. And if you are trespassing on private property there can be other ramifications.

Bedbugs are everywhere in major tourist areas. Health officials have not found a way to control the transportation of bedbugs all over the world by tourists and tourist transportation systems.

They are an extremely difficult pest to control. When you check into a hotel the first thing you should do is check the mattress on the bed to see if there are any spots that are the evidence of the bedbug. The spots can be from dried blood from the bedbug biting the guest. If you are staying in a hotel and you notice bites on your body in the morning, immediately check the bedding in the mattress, and make a report to hotel security. Some hotels will not be honest with you about having had a bedbug problem, and may even suggest that you are bitten somewhere else by an ant or other insect. Notifying the Department of Health in whatever location you are traveling is also a good idea if you suspect there is a problem that is not being acknowledged. You should also watch for what appear to be pest-control operators in the hotel or rooms that may be cordoned off.

Mopeds are extremely popular with tourists and result in many injuries and deaths. First of all, you want to make sure that the moped you rent is properly adjusted. You should also make sure that the moped appears to be well-maintained, is clean and neat and is a recognized brand. Moped experts have criticized mopeds from Asian manufacturers as being extremely poorly made and difficult to properly maintain and adjust. A crucial adjustment on a moped is the front fork because a motorcycle or a moped often have what is called a “caster” mechanism. That is what the shopping cart at the grocery store has on its front wheels– and we’ve all experienced a front wheel on a grocery cart that wobbles making it hard to steer the cart. That same wobble can occur on a moped or motorcycle if the front bearing is not tightly adjusted and the front and rear wheels not perfectly aligned. You can read about it on Wikipedia:

“Vehicles that can experience this oscillation include motorcycles and bicycles, skateboards, and in theory any vehicle with a single steering pivot point and a sufficient amount of freedom of the steered wheel, including that which exists on some light aircraft with tricycle gear where instability can occur at speeds of less than 50 mph; this does not include most automobiles. However, coil-sprung vehicles with a track bar setup such as the Jeep WJ, XJ, ZJ, TJ, and JK with both stock and after-market suspension lifts may also have this problem. The initial instability occurs mostly at high speed and is similar to that experienced by shopping cart wheels and aircraft landing gear.”

Because it stops the moped from steering, the operator will be unable to turn the moped as the front wheel vibrates back and forth.

Most people who are untrained will grab the handle bars harder and attempt to stop the vibration that way. But that is exactly the wrong thing to do. By attempting to stop the wobble by grabbing the handlebars harder or pressing down on the front wheel, the wobble is accentuated in the moped can crash. This “wobble” has often been referred to as a “speed wobble,” “death wobble,” “tank slapper” or “shimmy” and it happens when a moped or motorcycle is out of adjustment. You will not be able to look at anything on the moped to determine whether it is properly adjusted and you may be able to drive the moped many miles before a vibration sets off the wobble. It generally happens at about 30 to 35 mph.

Shark attacks have been on an increase around the world. In Hawai’i, sharks have attacked both surfers and tourists at the beach in recent years. Various theories exist about why this is happening, and one of them is that the food sources for the sharks are being depleted in the deep water and they are coming closer to shore to feed. Whatever the reason, the best way to avoid a shark attack is to stay in groups and to not swim or surf alone in areas around reefs that are isolated. Sharks do not seem to like the lot of activity and tend to attack isolated swimmers. Obviously, you don’t want to go in the water if you have an open cut that might bleed, which is known to attract sharks. Not every shark will attack a human being if an encounter occurs; many sharks mind their own business and are relatively harmless. Of course, the ocean is where the sharks live and you can’t pick your shark, so the best defense is to not get yourself into an area where you are alone swimming or snorkeling and you are fairly far offshore.

Some complain these days that the world isn’t fun anymore because we all have to worry about so many things. As a trial lawyer, I get the call from people who suffered a serious disabling injury or when someone has died. I have never spoken to someone who has suffered a life-changing injury or the death of a child or a friend or family member, who felt that the risk they took was worth it. For each of us, we will make our own decisions about what risks to take and what risks not to take. Do a little homework and become aware of the risks in the area you travel to, and double check recommendations from Internet sites that talk about secret places to go or thrills that the local people know about. Also, remember that the tour companies in the hotels don’t want to scare you off and may play down some risks that they know about. You have to protect yourself and your family when you travel. Do your own homework, don’t get hurt and then I won’t have to take a call someday because of the tragedy that happened to you.

Based in Honolulu, Attorney Wayne Parsons of the Wayne Parsons Law Offices provides legal representation to victims of serious injuries or wrongful deaths throughout Hawaii.   http://www.wayneparsons.com/